A road trip to Madhya Pradesh (central India) was long due, but the time never seemed to be right to undertake the long journey from Delhi. So, this time when the Delhi air turned fouler and everyone started howling about its negative impact on the resident’s health & well-being, we decided that the time has come to seek an escape from the noise and air pollution.

Our journey started on a gloomy morning in December when the city was shrouded in a dense smog and there was no sunlight. We planned to take the Taj Expressway till Agra, then onwards to Orchha for the first overnight stop. On the second day we continued to Bheraghat-Jabalpur, stayed there for two days, then moved on to Bandhavgarh for two days and started back on the return journey through Jhansi.

The route map below:

The drive from Noida through Greater Noida Expressway and then over Taj Expressway was very smooth. The road condition is excellent and proper fencing ensures stray cattle does not pose a risk to high speed cars. A no. of pit stops is available for refreshments, and a couple of food courts after Jewar toll plaza has the regular fast food outlets like Pizza Hut, Costa Coffee, Subway, Vaango, Bikano etc.

Exiting Taj Expressway at Agra, the route meanders through the crowded city of Agra. We reached Agra around 0930 – the peak traffic time and were slowed down by the traffic snarls. After the smooth drive of the Expressways, the slow-moving traffic of Agra does detract from enjoying the drive. From Dholpur onwards, the road turns into a single lane with no median and driving is tedious. We entered Orchha via NH27.

ORCHHA – the kingdom of lost valour

Established by Maharaja Rudra Pratap Singh in 1501, Orchha today stands as a testament to the valour of the Bundela Rajputs. Spread out on the bank of the Betwa river, this sleepy town has superb samples of Rajput architecture in its many temples and palaces.  Being small in size and concentrated around the main fort, all important spots can be easily covered on foot.

Besides the temples and palaces, a walk along the river bank is also a nice option while in Orchha. The Betwa river has a distinctive character of its own with rocky outcrops interspersed with deep and dark water. Kanchana Ghat (opposite the MPTDC hotel) is a nice place to enjoy the view.

Madhya Pradesh Tourism Department conducts a Sound & Light Show every evening at the Palace Complex in Hindi and English. The hour long show gives an overview of this Bundela kingdom and its rise and fall through the ages.

The accommodation options in Orchha are limited and are located mostly along the river bank. Homestays are available but those are a little further away from the centre of the town, mainly around the Orchha Bypass road. There are small eating joints near the Orchha Palace complex.

For our next stop, Bhedaghat, we took Orchha bypass and then joined NH 44. The national highway is 4-lane road, very well maintained with minimal traffic. After crossing the town of Sagar, the route continued over MP SH15 to reach Bheraghat. The state highway is still being constructed at places, so the going was a little rough on single lane roads. It took about 6 hours to cover 358 kilometres including a 30 -minutes wait at a railway crossing gate.

Situated by the side of river Narmada, Bhedaghat is about 20kms from Jabalpur city and the actual site where the river cuts through cliffs of marble rocks. It’s a small place focused exclusively on tourists visiting the marble rocks and the Chausath Yogini temple.

River Narmada is relatively placid here, and a boat ride to see the marble rocks and their bizarre formations is a must-do.

Boating duration varies between 30 – 60 mins and there are options of shared boat rides and personal boat rides. The charges are fixed – INR 50 for 30 mins, INR 100 for 1 hour – negotiation is not necessary.  Each boat has a guide-cum-oarsman who gives lyrical descriptions of the rock formations and snippets about the many Bollywood movies that were shot there.

The marble rocks themselves are impressive, rising to a height of 100 feet and varying in colour from pink, green, white and even black. At places the cliffs are so close to each other that it is said a monkey can jump across the banks (no monkey was ever recorded doing that stunt though).

A number of shops line the stairs that lead to the boating embarkation point, each selling marble artifacts. While some of them are eye-catching and genuine, it is advisable to do a thorough check of the quality before purchasing. Negotiation is mandatory.

The full moon boat ride is only allowed on Sharad Purnima when an annual festival is hosted at Bhedaghat. A laser show has just been started which describes the history of Bhedaghat.

Aside from the marble rocks, the Chausath Yogini is also worth a visit. Built in 10th Century AD, it has a distinct resemblance to the temples of Khajuraho in structure.

A couple of accommodation options are available in Bhedaghat, food options are very limited outside of hotels.

Dhuandhar – the smoky fall of Narmada

About a km from Bhedaghat is the 98 ft high Dhuandhar Falls, where the Narmada river plunges down an escarpment in a mist of spray. The name of the waterfall is derived from the fact that the water plunging down creates a veil of mist, leading to the name ‘Dhuandhar” or loosely translated in English as flow of smoke. The area around the fall is well maintained with proper pathways and viewing points. The ubiquitous hawkers which are common in most of our tourist places are missing here, leading to a peaceful atmosphere for contemplating the beauty of Narmada and the waterfall.

About 55 kms from Bhedaghat is Bargi dam built over the river Narmada. The Bargi lake (reservoir formed by the dam) is about 75 km in length and 4.5 km in width and is spread over an area of 267.97 km² covering the districts of Jabalpur, Mandla and Seoni. Worth a day – trip from Jabalpur and/or Bhedaghat, it is a good place to spend time on the water.

The Maikal Resort on the edge of the lake is the only accommodation and food option and also arranges cruises and speed boat trips on the lake.

From Bhedaghat we started for our next destination – Bandhavgarh National Park. The route is through Jabalpur, Shahpura, Umaria and on to Tala. Portions of the road traverses the National Highways 30 & 43, before joining Umaria-Bandhavgarh road. The latter road traverses a scenic portion of Madhya Pradesh, with small villages interspersed with forest areas. It is possible to spot small animals while driving along this route. On approaching Tala, a checkpost registers visitors and vehicles before allowing entry inside the National Park. Tala is also the main staging point for Bandhavgarh National Park and all official formalities are done in the office complex just opposite the Tala check post.

Bandhavgarh – an audience with royalty

With an area of 1536 sq. km, Bandhavgarh is one of the largest national parks of India. Previously the personal hunting ground of the Maharaja of Rewa, this forest was constituted as a National Park in 1968. From 1996, Bandhavgarh won the best reserve award in India for 15 years continuously.

With three gates at Tala, Magdhi and Khitauli, the jungle safaris in Bandhavgarh NP are organised with strict control on the entry of vehicles by MP Forest Department. Safaris can be booked in advance, online through Madhya Pradesh government’s site www.forest.mponline.com. There are two options for booking – a full vehicle or seat/s in vehicles. One vehicle accommodates 6 tourists, 1 guide and 1 driver. Considering the popularity of safaris in Bandhavgarh, it is advisable to book your vehicle or seat well in advance. Current booking (for the same day) is available at the ticket counter near Tala Gate. The counter opens at 1300 every day, and is usually very crowded.

Safari timings are 0630 to 1100 and 1500 to 1730. The first level of verification of tourists is done at the ticket counter 30 mins before the start of safari, the second verification is done at the actual entry gate. The considered opinion of the local experts seems to be morning slots are best for tiger spotting.

Touted as the best place to spot a tiger, this national forest is also rich in diverse trees – with bamboo and Sal trees dominating. Interspersed with them are Mahua, Palash and Tendu trees. 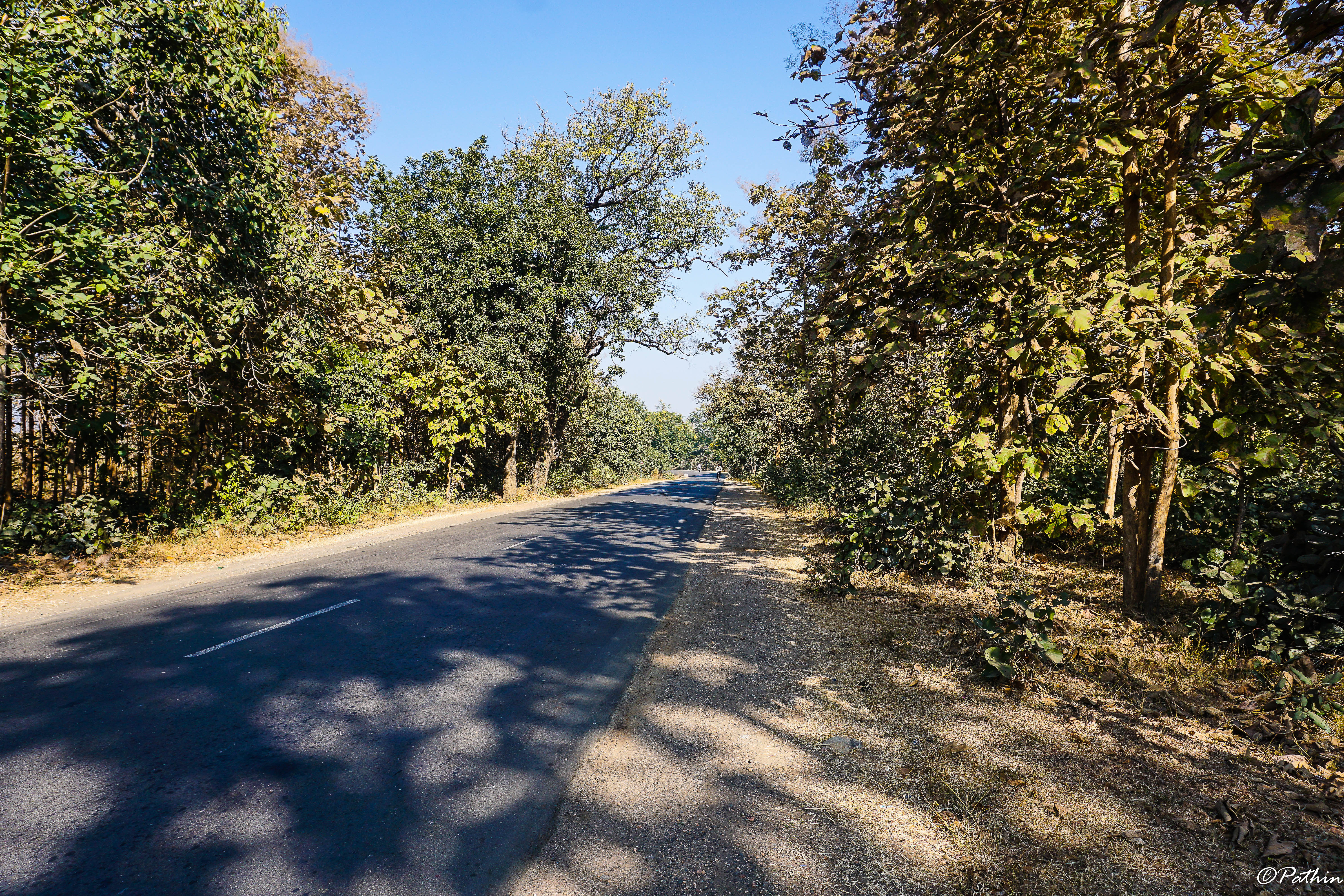 Aside from tigers, there are large herds of spotted deer, Sambar deer, barking deer, monkeys, Indian Gaur, wild boar, leopards, bears, and about 280 varieties of birds.

Bandhavgarh has large tracts of open grasslands, so animal spotting is relatively easier. Conversely, it also has innumerable water sources, so animals are dispersed over a larger area. The nigh safaris have been discontinued as also visits to the Bandhavgarh fort.

The return journey to Delhi was completed with a stopover at Jhansi. We passed through Katni, Damoh, Sagar, stayed the night at Jhansi, and then next day continued on to Delhi. After the scenic drives of MP, Jhansi was a big disappointment with its dirty roads and unruly traffic. However, the return trip over Taj Expressway connecting to Greater Noida Expressway was as smooth as expected and we could reach Delhi by late afternoon after a drive of 8.5 hours from Jhansi.